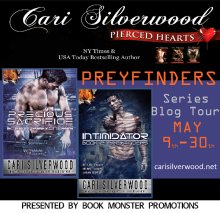 Entry via Form below.
This contest is sponsored by a third party. 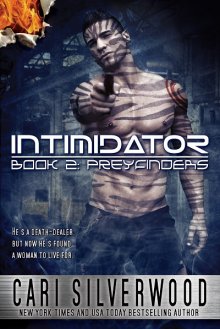 This is Book 2 in the new Preyfinder series. Book 1, Precious Sacrifice, is currently in the anthology, Kept.

Willow has her hands full scraping out a life in a grungy neighborhood where drugs and crime are the norm. Life is hard, but it's about to get harder. Being transformed into a sexual pet for an alien warrior may be her only way out.

But Stom, the man she's been awarded to as a battle honor, has no use for a female, not when his heart is still in a million pieces.

Though the need to be Stom's mate is overwhelming her, mending his heart isn't going to be enough. His enemies are searching, looking for the women who are more than they seem, but she's in their hands before she discovers she's more-than-human.

Sometimes it sucks to be a chosen one.

She stood. Anger tore her up. The next words blurted out before she could stop herself. “Fuck you.”

Ally might be wondering why she was out here. Forget this asshole.

“Wait. Willow.” He shot upright and grabbed her hands then added in his rumbly voice that shivered deep inside her, “You need to believe me.”

When she tugged and tugged, and couldn’t get free, her anger, stupidly, drained away.

He stared down at her like he could drive his words into her very soul. “Believe. You must believe me. Run away, fast. Go tomorrow.”

She swallowed, petrified, but not of him holding her. The fear was of what he meant, of how he was distorting her reality. Somewhere in what he said, she sensed truth and a world of horrendous and incalculable wrongness.

“I can’t.” Her words sounded so squeaky. “I have Ally. She needs me.” Tears wet her eyelids and she trembled. “I can’t leave.”

It would take her weeks to convince Ally. Months to sell the house. She had no spare cash, nowhere else to go, and why was she even contemplating all this?

Then he leaned in and kissed her. He wrapped his big solid, man-heavy arms around her, fairly crushing her to him, and kissed.

A shudder of lust slammed into her every cell. A volcanic explosion might, barely, have had the same effect. She opened her mouth and found he was already taking advantage of that small concession – nipping, licking and pushing his tongue inward past her lips. His wide thigh had somehow nudged her legs apart. His male scent assaulted her as much as the feel of him taking of her what he wanted.

Goose bumps swept across her skin in a chill wave that seemed to sensitize every tiny hair on her body.

Jadd is an Igrakk Warrior, honed like the sharpest blade, to kill and to command his men, but his conscience gets in the way. When punishment entails becoming a Preyfinder and trialling the Pet-creating drug on a human called Brittany, he plans to stay calm and do his duty. Until he falls in love.

A Preyfinder is trained to withstand hardship and pain, but Jadd would rather kneel before a firestorm than leave his captive, Brittany, to be stalked and killed. The choice between love and loyalty to his soldier brothers may tear him in two.

This contest is sponsored by a third party. We are just posting their contest on Night Owl Reviews so our users know of the contest. Prizes are given away by the sponsors and not Night Owl Reviews. The sponsor is solely responsible for the contest prize and winner selection.

And...in this real world, she has a lovely family in Australia, with the prerequisite teenager who dwells in the dark bedroom catacombs...a husband who raises eyebrows when he catches glimpses of what she writes, and a menagerie of other animals barking, meowing, and swimming about the place.