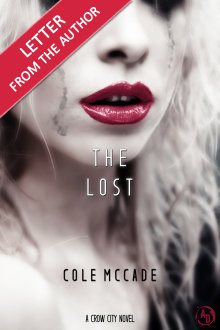 Cole McCade on How Anonymity Can Be Rewarding and Difficult

I think the hardest part of anonymity is just trying to be myself.

There’s a running joke among people who know me in real life, that Cole McCade is Batman while the real me is Bruce Wayne. It’s actually a little backwards; the real me is Batman, broody and dark and angry, while Cole is Bruce: the flirty playboy who still keeps certain things to himself, but for the most part puts a good face on for the world. Neither is really false; they’re just different aspects of the same person, not that different from idea of the professional face I put on for work. We don’t lay out everything about ourselves for work, around the people we clock in next to every day. And since being Cole McCade is not just a matter of anonymity, but my job…I tend to treat it the same way.

Even if not many people can say their jobs involve talking about dirty sex and kinky taboos, and turning that into a story.

The difficulty with Cole is that even if being an author is a job, engaging with the people who read and support my books is a very informal thing, and I’m always wanting to break out of that professional role to just be me with those people. To connect with them, to let them in, to form real and honest bonds as myself. There’s this expectation that goes with being a male author of erotica and romance, this idea of who I must be as this sex-driven, suave, witty, flirty bastard—not to mention the standard assumptions that I am, by default, a white heterosexual man. I’m always struggling with that. With trying to express myself as a bisexual man of color; with being a human who can be awkward and dorky and introspective and silly and sometimes even a little shy or sad or down, just as often as I can be sexy and dirty and charming. In some ways it feels like Cole is a one-dimensional aspect of me, the me when I’m feeling playful and flirty, and I’m always worrying over how much of my whole self I should let out. Because I know people enjoy the banter, the teasing, the wild runaway Twitter parties that venture beyond X-rated into XXX; I enjoy them, too. And I don’t ever want to let people down, especially when so many people have been so amazingly supportive.

But I don’t ever want to be fake with people, either, so I’m always wondering if I really should be holding so much back. Especially when I’ve made some amazing friends as Cole, and sometimes it’s hurt them to feel like I don’t trust them enough to give them those last small details: a name and a face. I also wonder, too, if I should be more silent about the issues I tweet about when it comes to using my platform as an author to shed more light on the problems POC and LGBTQIA communities face, because let’s face it: people don’t tune in to Cole McCade for the sociopolitical commentary. But silence often equals complicity, so I can’t—even if it means discussing things that aren’t necessarily relevant to what people follow me for.

At the same time…being Cole gives me a place to relax. Just as you don’t bring your problems to work, I try not to bring my problems to Cole. Any time I take on that persona I’m ready to have fun, to be snarky and crazy and wild. The anonymity gives me a place to escape from my real-life troubles, a distraction to clear my head. And there are actually some things that I let escape on Cole that I’d never say or do in real life; mostly inappropriate NSFW things, but there’s a certain freedom in that when the entirety of your professional image is built on being the gentleman rogue, the lecherous knave, the charming rake. The day-to-day filter goes away, something that’s normally extremely restrictive for me. Most people would be surprised to know that in real life, I’m quite reserved and dryly deadpan, save for in certain company. Several of the cultural influences in my multi-ethnic background have taught me a sort of stiff, quiet dignity and propriety, and sometimes it’s the voice of disapproval in my own head that keeps me silent.

So there’s a certain freedom in getting to be someone who can just let it all hang out.

Well, maybe not everything. That reserve means I’m also a rather private person, and in truth I enjoy not feeling scrutinized. I enjoy feeling like at the end of the day I can shut off, and who I am once the book is closed and the computer’s off isn’t being observed and analyzed. I remember when I first appeared on the scene there was a flurry of people digging for information on who I really am, trying to find the WhoIs information on my domain, poking around looking for…honestly, I don’t know. There’s nothing to find. There’s no dirty secret. I’m just an ordinary guy who happens to like his downtime and privacy, and who especially likes to be able to shut things out to focus on his writing.

And it’s nice to be able to have that, through the buffering layer of a pen name and a little discretion.

Even if writing this article has been a little odd, referring to Cole in the third person. I can’t.

I’m just so much more than that, as well.

The Lost - A Crow City Novel

There's something wrong with Leigh.

She's known it her whole life. She knows it every time she spreads her legs. Every time she begs for the pain, the pleasure, the heat of a hard man driving deep inside. She's a slave to her own twisted lusts--and it's eating her alive. She loves it. She craves it. Sex is her drug, and she's always chasing her next fix. But nothing can satisfy her addiction, not even the nameless men she uses and tosses aside. No one's ever given her what she truly needs.

Cold. Controlled. Impenetrable. Ex-Marine Gabriel Hart isn't the kind of man to come running when Leigh crooks her pretty little finger. She loathes him. She hungers for him. He's the only one who understands how broken she is, and just what it takes to satisfy the emptiness inside. But Gabriel won't settle for just one night. He wants to claim her, keep her, make her forever his. Together they are the lost, the ruined, the darkness at the heart of Crow City.

But Leigh has a darkness of her own. A predator stalking through her past--one she'll do anything to escape.

Even if it means running from the one man who could love her...and leaving behind something more precious to her than life itself.

Warning: This book is a dark read, so it's definitely not for the faint of heart!

Fascinated by human sociology, and particularly by the psychology of sex and gender – and their effect on relationship expectations, the culture of dating, and what it means to fall in love.

Non-smoker. The picture's just a stock photo. A rather broody, dark one for someone who isn't all that broody or dark, but sometimes forgets to smile even when he means to.