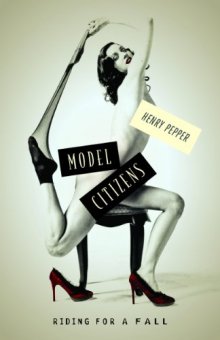 Model Citizens - Riding for a Fall

When Angela Durand and Joanne Hart use sexual blackmail to win the world's most prestigious modelling competition, they become instant Super Models and overnight celebrities.

What could possibly go wrong?

Plenty, including a boyfriend who is the greatest NFL footballer in American history and a psychopath. As Brett's life runs off the rails, his dark and perverted behaviour threatens to destroy Joanne and Angela's careers, ruin their lives and steal their sanity.

Packed with sexual indulgence, larger than life personalities, fast-paced drama and glamorous frocks, Model Citizens is a gripping reminder that, when it comes to the business of fashion, even the most powerful women in the world can still be reduced to living like candles in the wind.

Only love can save Angela and Joanne from being destroyed by the dark side of LA.

Henry Pepper is a broadcaster, journalist and writer based in Melbourne Australia. During his career he has reported on entertainment, current affairs, business and foreign affairs in London, Paris, Sydney and Tokyo. For a time he was well known to Australian journalists as the spokesman for the Australian Cotton Foundation. Model Citizens is Henry's first novel. He has repeatedly declined to deny rumours that his 'fiction' is real events.