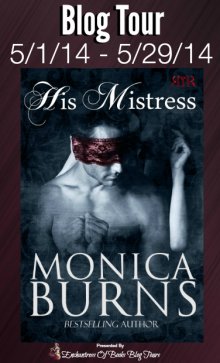 His Mistress by Monica Burns

Entry via Form below.
This contest is sponsored by a third party. 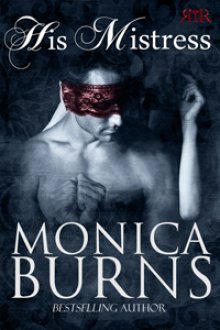 As a solicitor seeking justice for victims of violence, Tobias Lynsted must maintain control at all times while working in the seedy underworld of London’s East End. The darkness of his world creates a need for the intimacy and release he can only find in the forbidden pleasure of submission. The kind of pleasure where a powerful man has the freedom to let go of his control for a few sweet moments of oblivion. But when a blackmail scheme forces him to marry, the last thing he expects in a wife is a woman who will satisfy the darker side of his nature.

Lady Jane Grisham has no desire to marry, but choosing marriage over a life of destitution is an easy choice to make. Although Jane knows love is for the foolish, Tobias awakens her most wicked and darkest of desires. In the sinful world of domination and submission, Jane uses her blossoming skills to make Tobias surrender not only his body, but his secrets. But she quickly discovers that the true test of her strength is trusting Tobias with her heart

Free for the moment to watch her without the possibility of penalty, Tobias studied her as one might a work of art. His gaze swept downward to the curve of her waist and where her skirt billowed outward. Her dark hair brushed against her back like brown silk. The lust she’d drawn from his body only a moment ago took hold of him once more as he contemplated the temptation hidden beneath her wide skirts. In his mind’s eye, he knew exactly how he would pleasure her.

He’d make her cry out just like he had, and then he’d do it again until they were both satiated. As he saw her about to turn toward her, he quickly dropped his head knowing by looking at her he was defying her orders. He wanted to please her, not make her unhappy.

“My Lady,” he rasped. “I am grateful for your attention to my needs.”

“It gave me a great deal of pleasure to take care of you, Tobias.” she said softly as she returned to his side. “And despite that small tear, you even managed to avoid breaking your restraints. It demonstrates the extent of your self-control.”

There was an undefinable emotion in her voice that made him think she regretted not allowing him to bed her. Once more images of him filling her with his cock flooded his head. Almost immediately, he began to hardened. It would be only a minute or two before he’d be able to satisfy her as she’d satisfied him.

“Allow me to satisfy you as well, my Lady,” he said quiet confidence.

She didn’t respond to his request. Instead she turned away. Although his gaze remained downcast, he watched her bend down to pick up her jacket. Frustration blistered its way through him as he watched the burgundy waistcoat cover her beautiful breasts. One hand on her waist and the other at her throat, Tobias knew she was contemplating his offer. Even though he couldn’t see her face, he was certain she was frowning as she considered his words. The deep breath she drew in made his heart sink.

“I don’t think that’s possible.” Doubt riddled her words as she turned to face him. Long, beautiful fingers made short work of buttoning her jacket, and he sensed her uncertainty. It merely strengthened his desire to convince her to let him pleasure her.

“It is possible, my Lady.” Tobias’s body tightened with desire, his cock already halfway to becoming fully erect again. “Let me worship your body with my hands and mouth. Let me satisfy you as no other man has done before.”

“A bold promise.” There was a hint of breathlessness in her voice, but laughter as well. Tobias chafed at her amusement.

“You’ve asked me not to lie to you, my Lady. I am not lying when I say that I know how to pleasure you.” His harsh response caused silence to stretch between them for a long moment.

“I want more than the promise of pleasure, Tobias,” she said in a voice that had lost all trace of amusement. “I want complete submission.”

An icy finger scraped down Tobias’s spine, and the ground shifted beneath his feet as he considered her words. In the past, he’d heard similar words from the Ladies he’d sought his release with. But Mystère’s words held a far deeper meaning than any Lady he’d ever submitted to before. Fear twisted and knotted his gut until he no longer felt the pain in his arms.

She was asking for a part of him he’d never shared with anyone, and he had no intention of doing so now. When he didn’t answer, Mystère closed the distance between them. Her touch gentle, she undid his lace straps then gently pulled his arms downward until his bound hands hung loosely in front of him. The fingers that had gripped him moments ago made short work of the silk tie wrapped around his wrists.

“You may remove the restraints from your legs and dress, Tobias,” she said quietly as she turned away.

It was a signal their play had ended for the evening.

This contest is sponsored by a third party. We are just posting their contest on Night Owl Reviews so our users know of the contest. Prizes are given away by the sponsors and not Night Owl Reviews. The sponsor is solely responsible for the contest prize and winner selection.

A bestselling author of spicy historical and paranormal romance, Monica Burns penned her first short romance story at the age of nine when she selected the pseudonym she uses today. Her historical book awards include the 2011 RT BookReviews Reviewers Choice Award and the 2012 Gayle Wilson Heart of Excellence Award for Pleasure Me. She is also the recipient of the prestigious paranormal romance award, the 2011 PRISM Best of the Best award for Assassin’s Heart. From the days when she hid her stories from her sisters to her first completed full-length manuscript, she always believed in her dream despite rejections and setbacks. A workaholic wife and mother, Monica believes it’s possible for the good guy to win if they work hard enough.