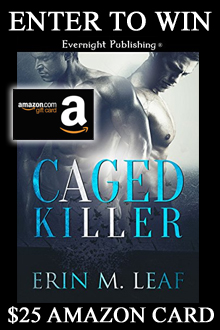 Erin M. Leaf has a wonderful contest for you. Just check out her website and get entered to win a $25 Amazon Card and an eBook!

Knox is a killer hired to catch a thief, but what happens when the thief catches the assassin instead, and chains him up? Nothing good. Nothing … sane.

Knox Calvin has spent his life repressing his sexuality. When Mick Lannon picks at his carefully constructed mental cage with a knife, he isn’t prepared for the fallout. Unfortunately, Knox isn’t the kind of man who can be bound for long, and Mick has his own demons to wrestle into submission. When Mick’s vendetta against his aunt’s killer spirals into all out war, Knox escapes to watch the carnage from a distance.

Mick likes his sex casual, his partners breathing, and doesn’t much care about anything else. Knox wasn’t interested in sex at all until Mick shackled him to a wall. What happens when one moment’s slip into darkness wakes up the monster in both men?

Get Your Night Owl Newsletter