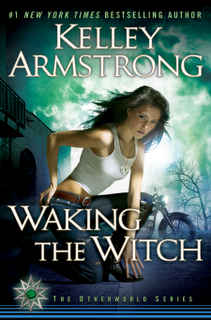 Kelley Armstrong’s WAKING THE WITCH, A Dutton hardcover, $25.95, National on-sale date: July 27, 2010, ISBN 978-0-525-95178-0
Golden girl of the supernatural world, orphaned daughter of a dark witch and a conniving sorcerer, Savannah Levine has nothing to lose and everything to prove on her first solo case as a paranormal investigator.
She’s got a wide arsenal of spells at her fingertips, many that only she knows.
She’s got a tough-as-nails attitude and an even sharper wit.
She’s got one problem though . . . no one thinks she can handle this on her own.
Savannah has the power . . . and she’s not afraid to use it.
Purchase Waking the Witch on Amazon!

------------------------------------------------------------------------------------
At twenty-one, Savannah Levine—orphaned daughter of a notorious dark witch and an equally notorious cutthroat sorcerer—considers herself a full-fledged member of the supernatural race that rules the Otherworld. The once rebellious teen has grown into a six-foot-tall, motorcycle-riding jaw-dropper with a full arsenal of spells that she’s not afraid to use when she gets caught in a bind. There’s only one small problem—her adoptive parents, Paige and Lucas, don’t always trust her. Of course, she’s given them plenty of reasons . . . but those are in the past. People can change, right?
When Paige and Lucas take off on a romantic vacation alone, leaving her in charge of their detective agency, Savannah is presented with a case that she can’t turn down, and one she can finally call her own. Recruited by another supernatural detective, she travels to Columbus, Washington, a small, almost shell of a town. Two troubled young women have been found in an abandoned warehouse, murdered. Now a third woman is dead, and darker forces seem to be at play.
Savannah feels certain she can handle the case, but with supernatural activity appearing at every turn, things quickly become more serious—and far more dangerous—than she realizes. Caught up in a web of lust, false identities, and lies, Savannah must summon strength from her depths, and fight like she’s never fought before.

Kelley Armstrong is the author of the New York Times bestselling Otherworld series, the young adult trilogy Darkest Powers, and many other titles. She lives in rural Ontario with her husband and three children.
With her first book, Bitten, Kelley introduced readers to her singular brand of sophisticated, fast-paced storytelling. The Otherworld, a place populated by a wide array of supernaturals with an even wider array of powers, continues to engage and enthrall readers all over the globe after more than a dozen books. www.kelleyarmstrong.com
Praise for Kelley Armstrong:
"Savannah is a gutsy, shrewd, and accomplished protagonist who will immediately capture the reader's allegiance. ..Readers new to the series will still be able to enjoy this delightful, fast-paced adventure without difficulty."—Library Journal on Waking the Witch
"Armstrong writes with page-turningly lucid prose and outfits her heroine with plenty of pluck, which she'll need to navigate the handful of handsome fellas who drop in for potential romancing.”—Booklist on Waking the Witch
“Armstrong skillfully juggles her twisty plot, weaving in characters from previous novels as she builds to a fast-paced conclusion." –Publishers Weekly on Waking the Witch
“There is never a slow moment . . . or a false line in Armstrong’s writing.” —Charlaine Harris, author of Dead and Gone and other books in the Sookie Stackhouse series
visit us at http://www.nightowlromance.com